Usually whenever you someone talks about running a WW2 campaign.  They're referring to one where the players play frontline troops, more often than not elites of some kind.  Marines, commandos, rangers, paratroopers that sort of thing.  Even when they're not playing elites they're still playing infantryman on the frontline.  You will never see a game set behind friendly lines, though you will see plenty behind enemy lines.  Now granted playing the company supply sergeant or some paper pusher back at the command post isn't really exciting.  Not the stuff that great campaigns are made of, does that mean that there's no way to run a behind friendly lines?  Of course not, you just have to go a little farther behind is all.  Possibly all the way back to the home front.  Now you may be asking yourself what's so interesting about playing civilians during the biggest war in history?  The answer is you don't play civilians.  You play the enemies to society who just happen to be the enemy of the enemy.  Who is now your friend.  You play Mobsters.  That's right Murder Incorporated is under new management and who's the new boss?  Good old Uncle Sam.

There's been a lot of speculation as to the extent of the Mafia's collaboration with the US Government during WW2.  Whenever the subject is discussed the opposing viewpoints generally fall into two camps.  Those that deny any cooperation between the Mafia and the Naval Department.  Dismissing it all as wild conspiracy theories.  Then there are those that insist that the exiled mafiosi in Sicily prepared for Operation Husky much the same way as the French Resistance did for Overlord.  Who's right?  How much of it is true?  Who's to say?  All I know is that it's the sort of thing that great games are made of.  I've even prepared a little timeline of the various string of adventures I'd use for this campaign.

February 1942 - The characters members of the diminished Mafia hit squad Murder Incorporated. Are called in to do a job for their boss Albert Anastasia's brother Anthony "Tough Tony"Anastasio.  The president of the Local Longshoreman's Union.  He wants them to set a fire, the target?  The SS Normandie a French cruise ship currently being refitted as a U.S. Navy troopship.  It's a job that requires a little delicacy, they can handle it however they want.  As long as nobody is found with a bullet in them.  Within a few days of the job the characters are hanging around as Military gentleman comes in.  Wishing to speak to Tough Tony and his brother.  From then on the characters are put work for government service.  Handling some things that has the Naval Department a little antsy.

March 1942 - Mostly spent dealing with problems along the waterfront.  Preventing strikes by longshoremen, possibly incited by an outspoken Italian American union member.  Who refuses to load cargo for a country that plans to go to war with the "Old Country" and has created himself a small following.  Stamping out a ring of thieves that's selling tires on the black market.  (At this point there's a rubber is a rationed commodity).  If anyone's gonna profiteering off of the war effort it's gonna be the Mob anyways not some unconnected crook with some spare tires.  Talking to thieves that are looking to steal Military ordinance to fence on the street.  That sort of thing.

April 1942 - This one is a nice little detour from what will have become standard fair by this point in campaign.  After a month of dealing with Military related matters, the players are called on to take care of a little family business.  Albert Anastasia wants them to clip Tony Romanello a fellow member of Murder Incorporated.  Who was arrested/questioned by the police a few months ago.  Part of the ongoing prosecutions against MI.  Romanello knows too much and has outlived his usefulness.  To make this a little bit more than just another guy who needs to be killed.  I'd probably make Romanello a recurring NPC in the campaign in the sessions leading up to this.  Maybe even having helped out with a few of the jobs that the players have been doing up to this point.  Hopefully to the point that they feel a little affection towards him.  Causing something of a sorrowful moment that's a staple in a lot of Mob films.  Anastasia will tell the characters to take Romanello with them on another long job.  This time visiting several neighbouring cities.  Namely Newark, Elizabeth and Philadelphia all of which are closely aligned with the family.  Doing some of the routine tasks they've been doing on the docks of New York.  On the last leg of their trip before they turn back they're to kill Romanello and dump his body in the countryside.  Outside of Wilmington a city with significant shipyards in Delaware.

May 1942 - After the Romanello hit there's still work to be done.  The usual dealing with union troubles, possible Axis sympathizers that sort of thing.  This is also the same time that Gas as well as Sugar rationing come into effect.  Which presents a whole host of new problems for the players.  Not only do they have to lean on black marketeers selling the restricted goods.  (If they don't pay the family its due protection money).  But also their own reduced access to gasoline since they are classified as non-essential personnel and as result will only receive 4 gallons a week.  Much less than would be needed for them to go about their usual business.  An interesting idea would be being sent to deal with a Teamster (truck driver), who's been getting a lot of military contracts.  Allowing him access to unlimited gasoline as long as it's vital to the War effort.  Which the driver has been siphoning from his tank and selling at a significant mark up.  It just simply won't do.

June 1942 - This is what I'd imagine to be the campaigns finale.  Through their handlers in the Naval Department the PCs are given a little job.  To keep their eyes out for some suspected German saboteurs.  Delivered to the shores of America by a German U-Boat.  According to the government's source they are somewhere in New York and an all out manhunt is looking for them.  After some investigation the players are of course the ones that find the would-be saboteurs.  Two of whom are Nazi true-believers, while the third in fact wants to defect to the US.  Depending on how it plays out the players may end up in a running gun battle where all the saboteurs are killed.  Or they actually manage to catch them completely off guard in their hotel room.  Handing the spies over to some rather embarrassed FBI agents.  Who will no doubt deny to the newspapers that the Mob assisted in the capture of the dangerous enemy agents.

So with that my little campaign pitch comes to a close.  I was considering either running this with GURPS WW2 particularly the Dogfaces sourcebook or Gangbusters.  (Updated to a date of 1942 of course).  I apologize for the long hiatus hopefully it won't happen again.  I also apologize for the shortness of this post in comparison to some of my others.  It is due in part to my being absent from the keyboard for so long.  If you liked this post please let me know what you think in the comments below.  Be sure to +1, re-share and follow this blog.  Until next time may you roll many crits.
Posted by Phillip Ribbink at 1:02 am

Search Stories and Other Such Distractions

Phillip Ribbink
I'm just a nerdy guy who writes about tabletop games. Not much more to it than that.

The impetus behind a lot of the action in this campaign. Usually whenever you someone talks about running a WW2 campaign.  They're... 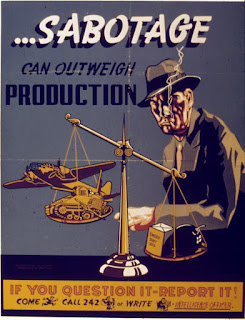